On Monday 21 November 2016 from 9 a.m. to 3 p.m. the second workshop of the project “Public and private as a topic of multidisciplinary research” took place in the Academic Conference Centre, Husova 4a, Prague 1. 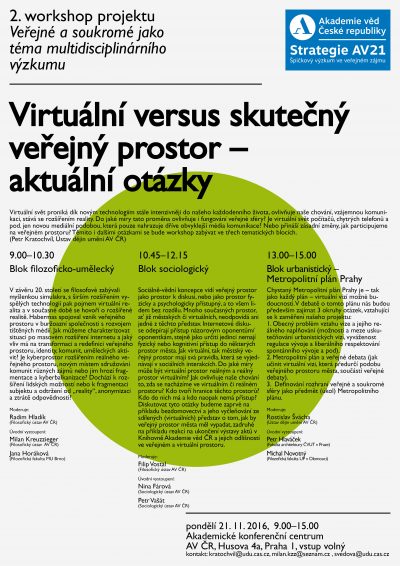 Thanks to new technologies, the virtual world plays an increasingly intensive part in our everyday life, influences our behaviour and communication among ourselves, and becomes an extension of reality. To what extent does this transformation influence the functioning of the public sphere as well? Is the virtual world of computers, smartphones, and so on, only a new form of media that simply replaces the communication media that were more usual in the past? Or does it bring with it fundamental changes in the way we participate in public space? The workshop dealt with these and other questions in three thematic blocks.

Towards the end of the 20th century philosophers considered the idea of simulacrum, then with the greater expansion of developed technologies they referred to the concept of virtual reality, and at the present time they talk in terms of extended reality. Habermas linked the genesis of public space in bourgeois society to the development of the printed media. How can we characterise the situation after the mass expansion of the internet, and what influence does it have on the transformation and redefinition of public space, identity, communities, and artistic activities? Is cyberspace an extension of real public space and a new place for bringing together different interest communities, or are they threatened by fragmentation and cyber-Balkanisation? Are we witnessing an expansion of human possibilities or a fragmentation of subjects, being torn away from “reality”, increased anonymity, and a loss of responsibility?

The concept of the social sciences sees public space as a space for discussion, or as space that is accessible physically and psychologically to everybody without distinction. Many contemporary spaces, whether urban or virtual, do not correspond to either of these concepts. Discussion on the internet denies access to those with opposing views, while certain individuals do not have physical or cognitive access to some spaces in cities. Both the virtual and the urban public space have their rules, which are established through social interaction. To what extent can virtual space be real and real space be virtual? How is our behaviour influenced by whether we are in virtual or real space? Who shapes the borders of these spaces? Who has access to them, and, on the other hand, who does not? We will discuss these questions by first taking the example of homelessness and its exclusion from shared (virtual) ideas of what public space in the city should look like, and secondly taking the example of reactions to the closing of the exhibition of nudes in the Library of the Czech Academy of Sciences and the differences between them in public and virtual space.

The Metropolitan Plan of Prague that is being prepared is, like every plan, a virtual vision of a possible future. In the debate surrounding this Plan we will be primarily interested in three groups of questions that relate to the subject of out project: 1. The general problem of the relationship between a vision and its real fulfilment (the possibilities of and limitations on the implementation of urbanist visions, the balance between the regulation of development and liberal respect for spontaneous development, etc.). 2. The Metropolitan Plan and public debate (how to make a virtual vision which predetermines the form taken by public space in the city part of public debate). 3. Defining the interface between the public and private spheres as a subject (or task) for the Metropolitan Plan.

The second workshop of the project “Public and private as a topic of multidisciplinary research”.
Organisers: the following institutes of the Czech Academy of Sciences – Institute of Art History, Institute of Philosophy, Institute of Sociology.
Contacts: kratochvil@udu.cas.cz , milan.kzz@seznam.cz , svedova@udu.cas.cz