Project Public and Private as a Topic of Multidisciplinary Research has been accomplished  with a collective publication Petr Kratochvíl (ed.): Public space in leopardy? Current problems of urban public space from the perspective of the social science and humanities, Artefactum Publ., Prague 2018. 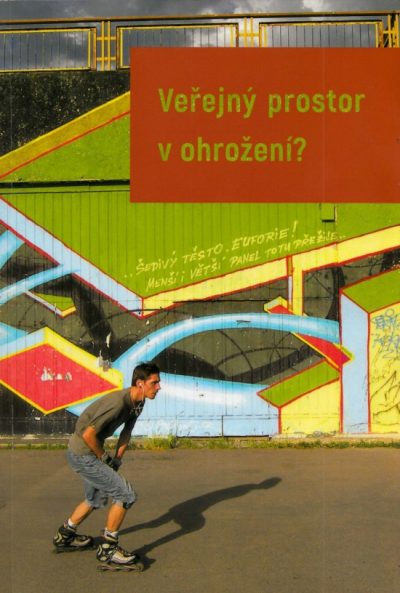 Urban public space – its appearance, function, new forms and perhaps threats – is today the topic of lively discussions of both the specialized and general publics. It is also a very complex topic, because urban public space always has some physical shape, is filled with activities, interpersonal contacts and relations, and bears cultural meanings. The architectonic-urbanistic, social and cultural elements join and condition one another here. It is therefore suitable in the theoretical analyses to approach this topic from the perspective of various scientific disciplines, precisely as this collective publication attempts to do. Sociological, philosophical, legal and art-historical interpretations, analyses from the point of view of the theory of urbanism and monument care are represented in it, but it also notices living art in urban space.

Great attention is paid today to the improvement of urban public spaces in the world and in our country.  We do not want to overlook in any way the fact that many historic squares, streets, parks and new public spaces of Bohemian and Moravian cities and towns have received more cultivated appearances in the past two decades. Nevertheless, this publication primarily focuses on the developmental tendencies that may or indeed represent a threat to the existence or healthy functioning of urban public spaces. Privatization, commercialization, gentrification, limitation of the social inclusivity of public spaces, their inappropriate build-up, and the inability to conduct a constructive dialogue on concrete projects and proposals – all of this undermines the quality of public spaces and life in the city in general. Therefore, these tendencies need to be the subject of public debate, because what kind of public space the city offers is in the end always the result of a social agreement.

The first two chapters of the publication – “Urban public space and climate change – opportunity or threat?” (Slavomíra Ferenčuhová) and “Reconstructive criticism of Habermas’s public space in the milieu of global interactions.” (Milan Kreuzzieger) – offer a basic philosophical and sociological definition of the concept of public space and its role in the urban milieu. They analyse different concepts of public and private relations and the development of the comprehension of public space in recent specialised literature. A more detailed list of the tendencies that are threatening public urban areas – whether neglecting their care or on the other hand their over-regulation, control or transformation into the superficially attractive backdrop of tourism – is provided by the chapter “A Renaissance or Crisis of Urban Public Space?” (Petr Kratochvíl), which, like most of the following text, focuses mainly on the problems of Czech and Moravian cities. The chapter “Lesná and Ďáblice: Monument protection of housing estates in terms of the public and private interest.” (Rostislav Švácha) shows how their heritage value is now threatened by insensitive reconstructions using the example of two housing estates (Lesná in Brno and Ďáblice in Prague), which for their quality exceeded the normal production under socialism. The legal aspects of the disputes over new construction are resolved by the chapters “The conflict of public and private interest in public space.” (Miroslav Kalný) and “Private owner of public space.” (Michal Novotný) using specific examples of a planned construction in Pilsen on the site of the demolished House of culture, or in the centre of Prague on a private plot, which is traditionally seen as a publicly accessible square. Both papers also discuss the problems of communication between the local government, the private investor, and the public. The chapter “Music in the streets of Prague – Disturbing the peace?” (Matěj Kratochvíl) thematises “busking” as a possible enrichment of urban life, which is, however, often perceived as disturbing and subjected to criticism of its form of regulation in Prague. The chapter “The public space of prefabricated housing estates: Collectivism, privatism and participation.” (Michal Lehečka) reflects the experiences from field research of one Prague housing estate and considers how the local inherited and newly formed social relations and structure are projected onto the possibilities and forms of participation of the population in shaping the public space of their residence. The very sensitively and sometimes controversially perceived presence of the homeless in public space is the theme of the chapter “Are Czech towns vengeful? A reflection on the nature of punitive urbanism in the CR.” (Petr Vašát), which confronts local strategies of how to deal with this phenomenon with the approaches gradually applied in some large American cities. The chapter “Gardening settlements as a private, public, or other space? On the neo-liberalization of the management of urban space.” (Petr Gibas) shows how problematic it can be to distinguish between only two contrary and narrowly understood categories of the public and the private, which inter alia would overlook the public utility of such specific urban spaces as precisely these gardening colonies are.

The form of urban public spaces and the rules governing their formation and use should be the subject of lively public discussion. This book also wants to contribute to that.

The publication is the output of the project, Public and Private as a Topic of Multidisciplinary Research within the framework of the Czech Academy of Sciences’ program “Strategie AV 21.”